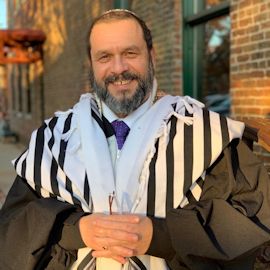 Israeli Rabbi Jeshayahu (Shai) Beloosesky (Bell-loo-sess-key) has been the spiritual leader for Congregation Children of Israel since his arrival in the United States in August 2015. His energy, charisma, love of people and Judaism are apparent to all those who have met him.

Rabbi Shai brings with him a wealth of experience. A retired Colonel from the Israeli Defense Forces, he had the opportunity to command, mentor, teach, and guide thousands of soldiers during his twenty-nine year military career. Among the many IDF positions he held, Colonel Beloosesky was Assistant to the Military Secretary to the Prime Minister and Minister of Defense the late Yitzhak Rabin.

It was during this time in his life that he decided to become a Reform Rabbi.  He believed that a person could approach Judaism in a variety of ways and that we must always respect the beliefs of others.

Following his distinguished service in the IDF, Rabbi Shai worked for Toronto, Canada’s Jewish Agency serving as its advisor and supervisor of Jewish education.  He also founded and directed the Adraba Organization in Israel, which provides informal education and promotes Jewish identity both within and outside Israel.

Following his ordination in 2011 at the Hebrew Union College in Jerusalem, Rabbi Shai became the leading rabbi of Congregation Or-Hadash in Haifa, Israel where he assumed all rabbinic responsibilities.  He holds a Bachelor’s Degree in Jewish Studies and History as well as a Masters degree in Political Science from the University of Haifa. In April 2021, he was awarded his Doctorate in Ministry from Hebrew Union College in New York City. He is currently studying for certification as a Psychoanalytic Therapist with the Blanton-Peale Institute & Counseling Center located in New York City.

He credits his parents and grandparents for instilling in him the love of Torah, Judaic tradition, love of humanity, love of Israel, and a strong belief in following the right path. These attributes have remained with Rabbi Shai throughout life, and he is now passing them along to his four sons.

Rabbi Shai’s extensive life experiences have helped shape a man of strong character and spiritual strength. His love of people, his love of teaching, his boundless energy, and his strong vision for the future are attributes for which he is admired. He views himself as an emissary whose mission it is to bring sparks of light where they are needed most. Rabbi Shai has developed friendships that extend throughout the United States and reach around the world.

Congregation Children of Israel is fortunate to have Rabbi Beloosesky who has brought strength, vision, knowledge and passion to our congregation. We are appreciative and thankful to call him our Rabbi.